On March 6th we attended the TDCV 2017 – the Trend Day Corporate Video 2017 in Munich, organized by the CTVA – Corporate TV & Video Association e.V. The overall topic was “VR/AR & 360° video – straw fire or success factor? Storytelling, worlds of experiences and value added”.  The TDCV 2017 was characterized by workshops, interesting presentations and discussions, demonstrations of best cases as well as the possibility to test different 360° and VR applications.

After a short keynote, participants were split into groups, discussing four different topics. I was part of the group which discussed target groups for 360° / VR / AR. It was questioned, if the new media format is appropriate for any target group and what the additional value for the customer and the company is. For marketing purposes, the VR technology is pushed into the market and often no research is conducted that investigates whether it is a suitable medium for the specific target group. 360° content is produced without even questioning what the purpose or goal of the campaign should be. However, as we learned later from lightshape during  the presentation on the Porsche VR experience, their VR product presentation attracted different interest groups and age classes and provided a positive experience of the brand and its technology. From what they shared from their experience, the VR application was not created for a specific target group, but resulted in a great success. However, during the workshop it was commonly agreed upon that it is definitely recommended to conduct research concerning the target group before investing in the production of content. Another interesting scenario discussed during the workshop was how user-generated content could possibly affect companies. Let’s imagine that at one point in the future customers would be able to upload their 360° video to review platforms. Do you think this would influence the perception of those companies or the booking behavior of customers?

VR as a successful technology?

Matthias Bastian, however, sees two important paradigm shifts. First, the medium itself will disappear and second, interaction will get more naturally. This will reinforce the development and spread of VR. He also mentions that there will be no “killer-app” that will be crucial for the development of VR. With the question of “What do you do with your computer?” he wants to indicate that with future developments possibly anything could be done in VR. Additionally, he considers VR and AR as complementary technologies, and it is not an either-or-question. Advances in technology, such as eye- and face tracking, will create new application fields. Wireless devices and new interfaces that enable reliable tracking of hands and feet will enable an easier and more intuitive handling. This is in line with Patzer, who also points out that so far it has been quite difficult to find content that really works how it is supposed to work, also on YouTube. However, he is convinced that good content for marketing purposes could result in customer retention and at one point in the near future,  VR will be considered the benchmark in advertising. Sooner or later solutions have to be developed to enable simultaneous interaction, such as the integration of direct booking options, which is again reinforced by the statement of Bastian that new application fields will be developed.

One company who is already using VR (or more specifically 360° videos) for marketing purposes is the Thomas Cook Group.  Thomas Cook wanted to change the appearance of their travel agencies and provide an experience to customers. Therefore, they designed the travel agencies more interactive and modern by providing screens, tables, interactive walls and VR goggles.
We have already drawn the attention towards the fact that the creation of a 360° video needs good preparation (maybe also including a pre-written script), high quality cameras and a professional team. Thomas Cook however, has a different strategy, which has been proven to be successful. For the choice of HMDs and 360° cameras, the company had to decide between high end, mid range, and smart solutions. For both the HMDs and the cameras the decision was made for the smart solution. The interesting fact is that the content provided for the customers is user-generated content, captured by “regular” Thomas Cook employees who are on a business trip. This allows the company to produce 360° content without the need for a lot of additional resources, be it human resources, time or money. People are already on-site and combine their regular business duties with capturing the location. To ensure consistency in terms of corporate identity and that no personal rights (of people who are also on-site) are violated, all captured footage is checked and post-processed. So far, already more than 1,000 VR googles have been distributed to travel agencies, than 100 hotels and 15 destinations have been captured. According to Thomas Cook, the customers love the 360° sneak peek, but there is no information available if the presentation in 360° influences the conversation rate. They will continue to work on their 360° content and strategy, thinking about different options on how to integrate the videos also at different touch points, such as airports. It would be interesting to see if the simultaneous booking option, as mentioned by Patzer, will also be a future development of Thomas Cook and tourism related VR applications in general. 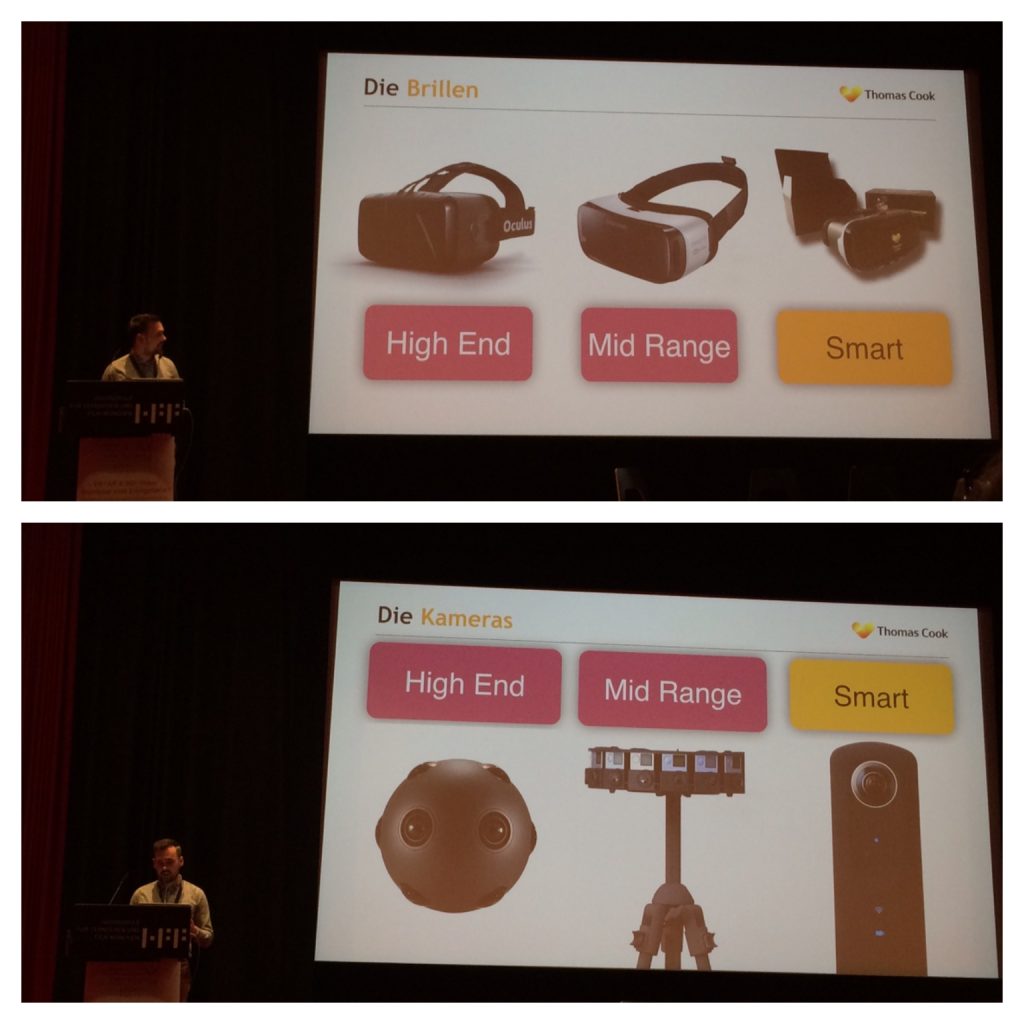 The 360° videos provided by Thomas Cook show hotels, destinations and leisure activities in the destinations. Most of the times they are snapshots in time and there is no pre-written script. However, in a panel discussion it was commonly agreed upon that VR without storytelling works, but not in the long run. Dr. Andreas Wilhelm highlights that it is particularly important to preplan the primary field of view and ‘dictate’ the guidance through the video. A different approach was mentioned by Matthias Leitner. Sometimes the best strategy could be to let the story be the story and focus on the technology and mechanics.

Live streaming in VR presented at the TDCV 2017

Daniel Guthor not only presented but launched the “Live – Streaming VR App” by Aspekteins at the TDCV 2017. The app enables a presenter to start and stop a 360° video simultaneously for all devices that are connected via a server. On a heat map the ‘leader’ sees live at which points the participants are looking at and therefore the leader can interact with the viewers and guide them. This app could be also really interesting for the tourism industry. Imagine you have a virtual guided city tour and you have the possibility to guide your viewers, no matter where in the world they are situated with their devices.

Following this link, you can find interviews with different speakers at the TDCV 2017 on the topics of content creation, application fields of VR, storytelling and many other topics. I provided now only a short summary of a whole day of interesting discussions and presentations. I have learned a lot at the TDCV 2017 and left the conference with a lot of input that is already or could become also relevant for the tourism industry.  What is your opinion on storytelling in VR for tourism – is the story more important or the medium or technology used to transmit the story? How do you think that t360° user-generated content could influence the tourism industry? What is your experience with the creation of 360° videos? Do you see use cases for live streaming apps in tourism? Let us be part of your experiences and opinions 😉