Within a timeframe of five working days, 113 experiments could be conducted. Due to sampling criteria 101 out of 113 experiments are valid, meaning that 12 experiments are not valid, as participants either have already visited the city of Dubrovnik or did not fall into the age category of Generation Y. By splitting the experiments into a control and a treatment group, it can be stated that 51 experiments were conducted within the control group and 50 experiments within the treatment group. The data was collected using an online questionnaire tool, thus, the data could be easily exported to an excel-file in order to be coded. The analysis of the primary data was done using SPSS.

To better understand the sample group, the demographics were analysed. In total, 49.5% of participants were female, 49.5% were male and 1% of the sample did not indicate the gender. Moreover, 29 different nationalities were encountered within the sample, whereby the majority of participants came from Austria (49.5%), followed by Germany (12%) and Italy (4%). Concerning the educational background, 40.6% have a high school diploma and 50.5% a bachelor’s degree. Lastly, 72.3% of the sample are currently students, followed by 18.8% of part-time employees.

To be able to identify whether VR has a positive influence on tourist’s information search process and tourist’s decision-making process, first the quality of the promotional material as perceived by participants was analysed. On average, the brochure was ranked with 2.76 stars within a rating range from 1 star (very poor) to 5 stars (excellent). The amount of variation around this average is 0.951 as represented by the standard deviation. In contrast, the VR video was ranked with 3.84 stars within the same rating range and with a lower standard deviation (0.766). Based on this, it can be concluded that participants liked the VR video more as promotional material compared to the brochure. Furthermore, due to the lower standard deviation it can be concluded that the agreement within the group who have seen the VR video on its quality is higher.

Table 1 represents the mean agreement level of participants with the statements included in the battery of Likert Scales related to the information search process. Considering Cronbach’s Alpha (0.870), internal consistency reliability for this battery of Likert Scales is relatively high. Additionally, reliability statistics showed that no item needs to be deleted for the analysis, as Cronbach’s Alpha would not increase. Taking into account the scale from 1= totally agree to 5= totally disagree, it can be observed that in terms of the information search process, VR shows better results than brochure. The information provided thought VR stimulated stronger the subject’s senses and offered them higher quality information with a 1.90 for VR and just 3.35 for brochure. In addition, when answering if the provided information reduced elements of uncertainty brochure only showed 0.69 less in comparison to VR. It is relevant to mention that after watching VR subjects felt like being at Dubrovnik showing a stronger result (1.82) than the brochure (3.73). An equal variance t-test reveals a statistically reliable difference between the mean agreement levels to Likert Scale statements for people who saw VR and brochure.

For decision-making process VR played an important role as well (Table 2). Table 2 represents the mean agreement level of participants with the statements included in the battery of Likert Scales related to the decision-making process. Considering Cronbach’s Alpha (0.898), internal consistency reliability for this battery of Likert Scales is high. Moreover, reliability statistics indicated that no item needs to be deleted for the analysis, as Cronbach’s Alpha would not increase further. The results showed that mostly subjects agreed that VR allows them to pre-experience facilities and attractions in a stronger way than after reading a brochure. In addition, after seeing VR promotional material subjects were more sure whether travelling to Dubrovnik in the future (1.80) and brochure showed lower result (2.53). However, in terms of creating a clearer destination image subjects’ answers were close as for VR (2.14) and brochure (2.75). An equal variance t-test reveals a statistically reliable difference between the mean agreement levels to Likert Scale statements for people who saw VR and the brochure. 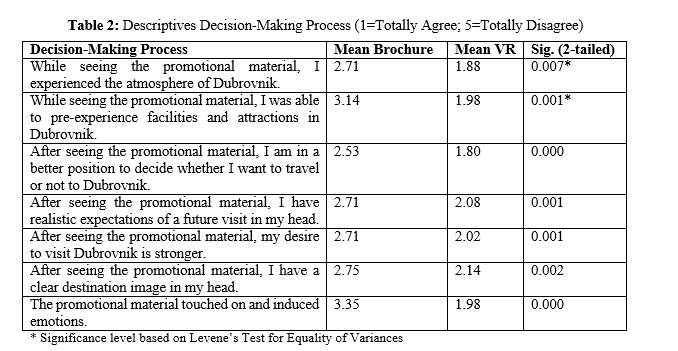 * Significance level based on Levene’s Test for Equality of Variances