As mentioned previously in chapter 2, this new era of VR hails Oculus with their Rift HMD as the pioneer. However, since the Rift was presented to the public for the first time in 2012, a myriad of other players have entered the market, or at least announced their products to the public. Most of the public’s focus is put on the development of new HMDs, where one can identify different product categories also. While the popularity in the category of high-performance HMDs is undoubtedly the highest for the Oculus Rift, other companies will release their products throughout the year 2016 as well. Another anticipated headset is the Vive, which sprung from a cooperation between HTC and Valve, a video game developer. Sony is also working on their PSVR system, which will function together with their PS4 gaming console (Kumparak, 2014). However, not every headset under development is high-performing. Samsung has released their Gear VR last year already (Samsung, n.d.). VR from the Gear VR is not considered as tethered VR, but rather mobile VR. Tethered VR is VR with an HMD that is connected via cable to a high performing workstation, where the virtual worlds are displayed on dedicated displays in the HMD (Gutiérrez et al., 2008; Fry, 2015). In mobile VR, high-performing smartphones, running an application that shows content in stereoscopic mode through applying a split screen, are used in combination with a headset that has some built-in lenses to create a wider field-of-view. The processing power and sensors of the smartphone are used to synchronize head movements with displayed contents (Munster et al., 2015). Particularly in the mobile VR area, there are numerous more headsets on the market, the Viewmaster VR being another prominent name that was recently added as an official iPhone gadget to the Apple Store (Viewmaster, n.d.).

There is also an even simpler headset version offering virtual experiences, in the form of Googles Cardboard Viewer. Developed by two Google employees in their creative time, the company quickly adapted the idea and started mass producing the headset made out of cardboard soon after (Metz, 2015b). To date, they have shipped over five million cardboard viewers and developers have created over 1000 applications for use with the cardboard headset (Cappellina, 2016), paving the way for mainstream adoption. Due to its form factor it can be considered as a fully-immersive HMD, yet with its rudimentary nature it only offers a low degree of immersion; a view also supported by the analysts of Piper Jaffray Investment Research (Munster et al., 2015). However, not all technology is focused on the HMDs. Creative minds and engineers are joining forces around the world to create different input methods for use within VR. Notable examples are Oculus with their handheld Touch controller that are expected to hit the markets in the third quarter of 2016 (Oculus, n.d.). Joining that list is HTC with their own handheld controllers for the Vive (HTC, n.d.), which are scheduled for release in the second quarter of 2016.

But while these are just the handheld controllers, there are yet again different categorizations to be made for different input devices. Going into a completely different direction is for example the company Virtuix with the Omni (Virtuix, n.d.), which essentially is a circular treadmill that one gets strapped into. Because of the low-friction surface and the fact that the user is strapped into the device, they can move around freely in every direction. That movement is then tracked and translated to the virtual world. Cyberith is an Austrian company pursuing the same objectives with their Virtualizer (Cyberith, n.d.) that managed to fund development through a successful Kickstarter crowdfunding campaign. However, in a recent statement sent out to their pre-order clients, the company explains that the delayed release of HMDs is forcing them to focus on developing their B2B relations first, canceling  the pre-orders placed in their web-shop.

Nevertheless, there are other companies aiming to combine everything into a single product, such as The VOID with their Rapture set. It includes an untethered HMD, a haptic vest that provides force feedback and a set of gloves. Their products are currently still in development, however, they prepared a special demonstration for attendees of the 2016 TED conference in Vancouver (Thu-Huong, 2016).

This infographic gives a compact overview of the available technologies on the VR market. 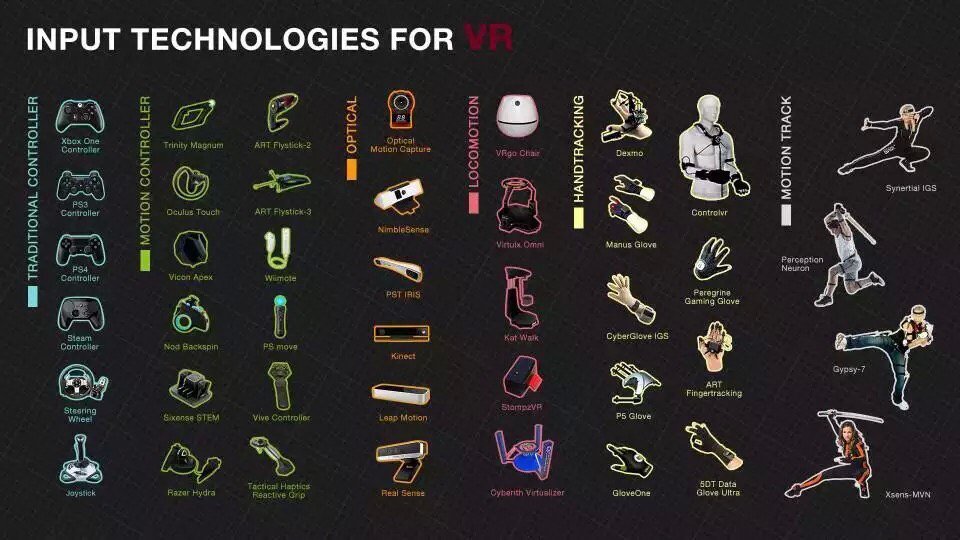 While there are numerous more inventions such as eye-tracking, motion controllers, movement simulators and body sensor suits, the author believes that a sufficient amount of technologies has been introduced at this point. What becomes clear very quickly is that a lot of the devices currently on the market seem to be designed with an apparent use in the gaming industry in mind. Nevertheless, upon further thought, it seems logical that for example the VR treadmills on the market cannot only be used to simulate movement in a game, but also to simulate for example a city tour.