The team from the Virtual Reality in Tourism blog attended one of the most inspiring and interesting conferences this year. The International AR VR Conference 2017 in Manchester was organised by the team of the Creative ARVR Hub at Manchester Metropolitan University under the lead of @DrTimothyJung.  The conference was organised to bring  Industry and Academia together.

The opening keynote speech of the conference was held by Dean Johnson, Head of Innovation at Brandwidth. Beside the crazy experiment of spending 24 or even 48 hours in VR, Johnson emphasized that “not everyone is talking about VR, but that is our mission to make sure they are”. Furthermore, he presented an exciting VR project in the field of education. The MARS EXPERIENCE: “The Mars Experience Bus is the first immersive VR vehicle ever built and it replicates the Martian landscape.”

Gareth Hurley, head of product management for Samsung, told his strategy how to create an interactive connection with the user in order to create a strong relation with the user as Apple does. With Samsung LifeLIVE they enabled a soon-to-be-dad experience, to witness the birth of his newborn baby in VR Samsung’s gear.

The Academic Track gave more insights into uptodate research projects around the world. @VirtualSarahJ and @SteveDawkins presented their amazing VR experiment #ChungKing360 and added a full-sense experience to VR. In order to virtually experience the food market Chung King in Hong Kong, smell and heat were adjusted in a tent around the VR user to increase the level of immersion. The users showed very interesting reactions: “I got into the tent and right away I could notice the different smells and the heat that was coming into the tent as well. It made it feel a lot more realistic that I was there.” Another very important point was the not occuring motion sickness: “By adding in heat & smells, I don’t feel the motion sickness that I did!” 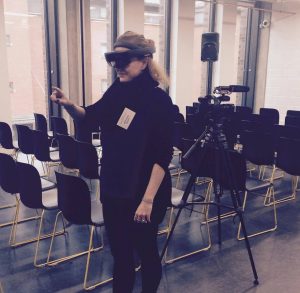 After a panel discussion with different experts from the industry, with the key message that especially the content is crucial when talking about AR and VR in the future, the second Academic Track gave more examples of innovative application fields of AR and VR. Theodore Koterwas from the Oxford University Museums showed impressive use cases how to use AR in a museum to create a deeper understanding of the artefacts for the museum visitors. The app Pocket Curator for the Museum of the History of Science is using AR to explain the use of old instruments like a sextant or the first wireless transmitter. Regarding museums, @LarraNeu presented her research project how the experience of museum visitors can be enhanced with AR. Therefore, an AR application prototype was developed in order to test it in a museum in Salzburg, Austria. Ella Cranmer from MMU presented her research about the economic output from AR when applied to tourist attractions. Applied to a case study of Geevor Museum, Cornwall, UK, the research could show that the application of AR in the museum provided additional information about special handmade historic food that is sold in the cafeteria and can increase the number of sales, by creating a greater connection between the museum experience and cafe.

The last keynote speaker of the day was Prof. Richard Köck from the University of Liverpool who spoke about inhabiting the Image of the City. As an architect, he created the term UR which means URBAN REALITY and defines it connected to the definition of VR as “the simulation of a three-dimensional image or environment that can be interacted with in a seemingly real or physical way by a person.” Using Mixed Reality in an urban context poses the question if people are therefore integrated as only spectators or actors in defined contextual space. He closes his discussion with the following quote that sums up the content of the conference and poses AR/VR/MR in the right future context:

“Walls are no longer walls; beginning and end of available space no longer coincide with visual space. This results in a merging of domains. What we see is a dialectic whole pf physical and virtual spaces that have no fixed boundaries, neither between the two categories nor among themselves.” Nanna Verhoeff 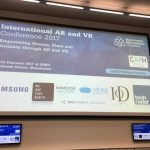 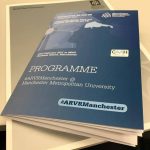 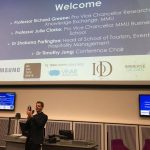 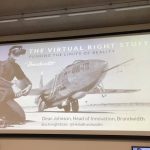 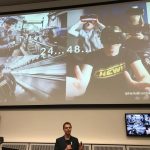 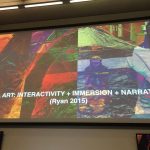 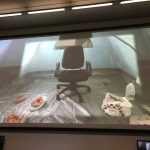 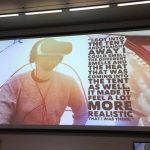 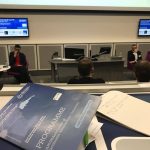 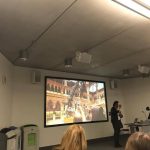 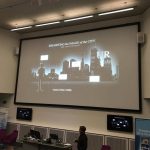 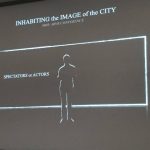 Latest posts by Larissa (see all)