There were many more touristic stakeholders present at ITB than just airlines, so here is our take on how destinations fared and how spread out the use of VR in destinations was across the ITB.

Considering the great hype that VR is experiencing at the moment, we were expecting to see many VR displays prominently advertised. But when we first set foot into the halls of ITB, there was no particular sign that VR would have a great significance during this trade show. However, we did find several destinations that had brought VR showcases to the fair. We had to pay a lot of attention though, because in most cases the VR displays were not promoted as something special or new. Most of the time, there was just a lost VR headset laying around at a table, with an exhibitor only aiding you with it upon request. At initial thought, this seemed rather odd – if destinations took the trouble to produce VR content, why not promote it as the special experience that it is? 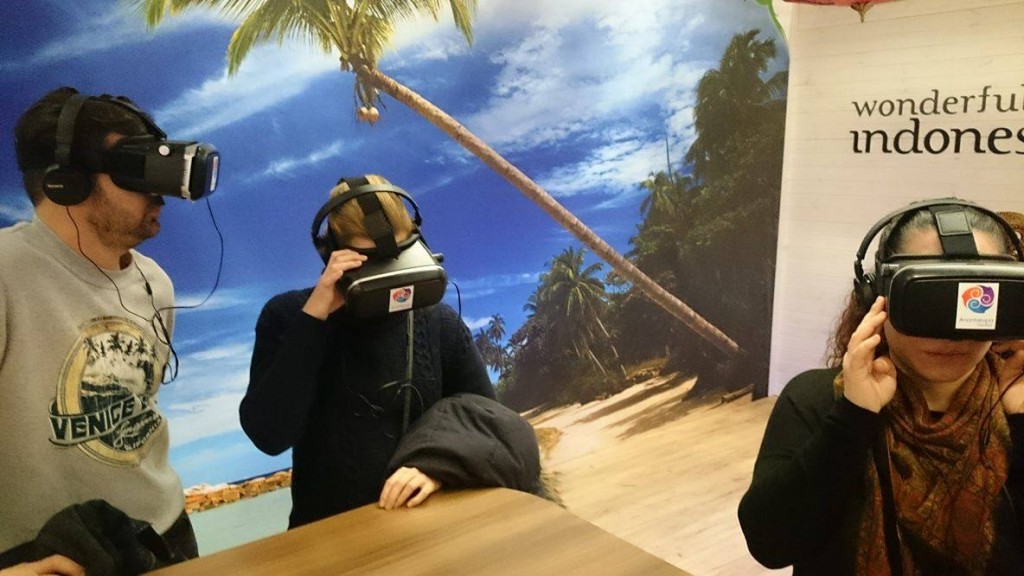 Consumers trying out the VR experience in Indonesia’s booth

The answer to that we cannot give with certainty, however, we do have an idea. When testing VR experience after VR experience, it quickly became obvious that most destinations were still just experimenting with VR. Apparently there is still a lot of hesitation to seriously commit to the time and financial investments a VR project will cost. The experimenting resulted in VR content that went from sickness-causing to awe-inducing. It was obvious that some videos lacked meaningful content and were not professionally stitched, in many cases it seemed as if the content was produced with too little knowledge about the medium.

Therefore, it appears as if many destinations try to be pioneers in providing VR content, but in fact they are trying VR with baby steps, not commiting too much to it, waiting for reactions of customers, before they actually start to advertise it in a greater manner. Is that the right way to go? We can only refer to Destination BC, who commited to using using new technologies in their campaigns and were the first destination to implement VR in a large manner back in 2014. They put a lot of effort and financial resources into the project, and the response to their project has so far been exclusively positive. Now they are also expanding the content that is available in VR, to also include skiing experiences.

Here is a list of destinations (in no particular order) we spotted using VR. They almost exclusively used Samsung Gear VR in combination with S6s. Exceptions were some Rift DK2s and cheap unbranded copies of the Gear VR. The list is by no means complete, however, we were posed to organizational difficulties with the amount of exhibitors being around 10.000 at this years ITB.
Feel free to add your experiences with VR in destinations in the comments.