To derive overall tendencies, available cameras for 360-degree content production can be clustered into three sections: budget cameras, often used by beginners, middle range cameras for ambitious amateurs and high-priced ones that are used by professional agencies or filmmakers. 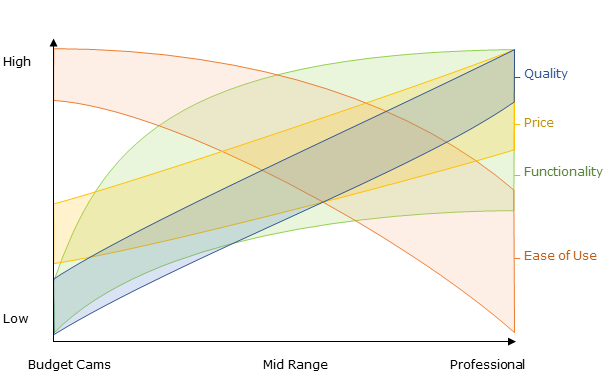 Qualitative comparison of 360-degree cameras across price ranges in terms of quality, price, functionality and ease of use.

These cameras are characterized by their ease of use, simplicity and affordable price. Additionally, users do not need to acquire specific skills for the post-production process. Often, providers offer packages that include stitching software and editing tools with the camera purchase. In terms of functionality and recording quality, this hardware is somewhat limited and targets occasional shootings with moderate quality requirements, in comparison to the second two clusters. Some examples of these cameras available on the market are LG 360 CAM, Ricoh Theta’s cameras or Samsung Gear 360.

Ricoh Theta SC allows users to capture 1080p HD videos at 30fps but also capture 14MP spherical images. The simplicity of this camera permits anyone to capture pictures and videos, and to transfer them wirelessly to the intuitive smartphone or computer application offered by the provider for editing. The smartphone app is available for Android and iOS devices. Thanks to interfaces to the most common video platforms, anyone can share their moments immediately with friends or family through platforms that support 360-degree footage. Furthermore, some other versions of Ricoh Theta even support livestreaming and that deliver stitched material in real-time. The offered price of this camera is 299,99 €. 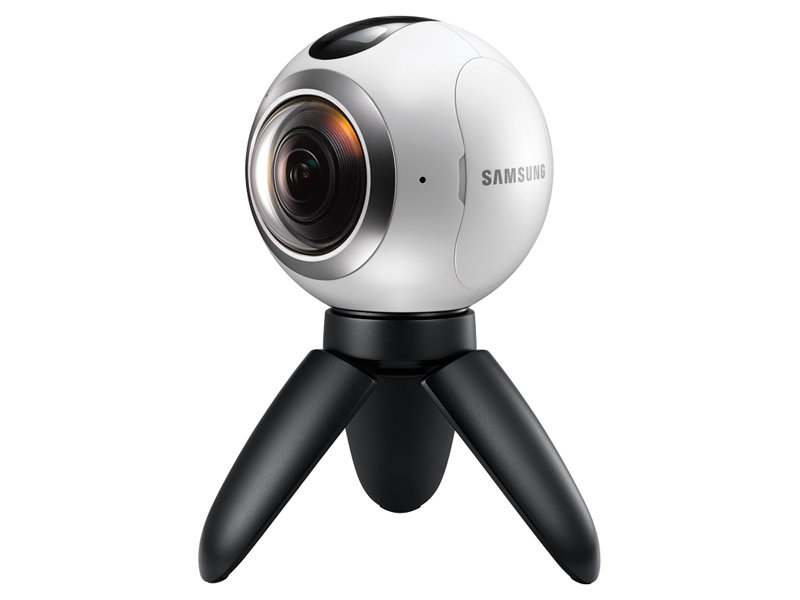 Samsung Gear 360 has double fisheye lenses, each covering 180-degrees at 15MP resolution in photo mode and 4K resolution in video mode. Similar to the previous camera, the provider offers an app that stitches immediately the footage and shares on social-media. Unlike the former 360-degree camera, Samsung’s app is only compatible with Android mobile devices. This camera is offered for 349 €.

Cameras of this group are also considered to be consumer devices that are not hard to use. Middle range cameras differ in price with the beginners’ class, which reflects in the offered recording quality and functionality. These aspects are often better in comparison to the beginners’ cameras. However, they are not as good as professional ones. Examples for these cameras are Nikon KeyMission 360, Giroptic 360cam or 360fly 4K (Hand Orellana, 2016). 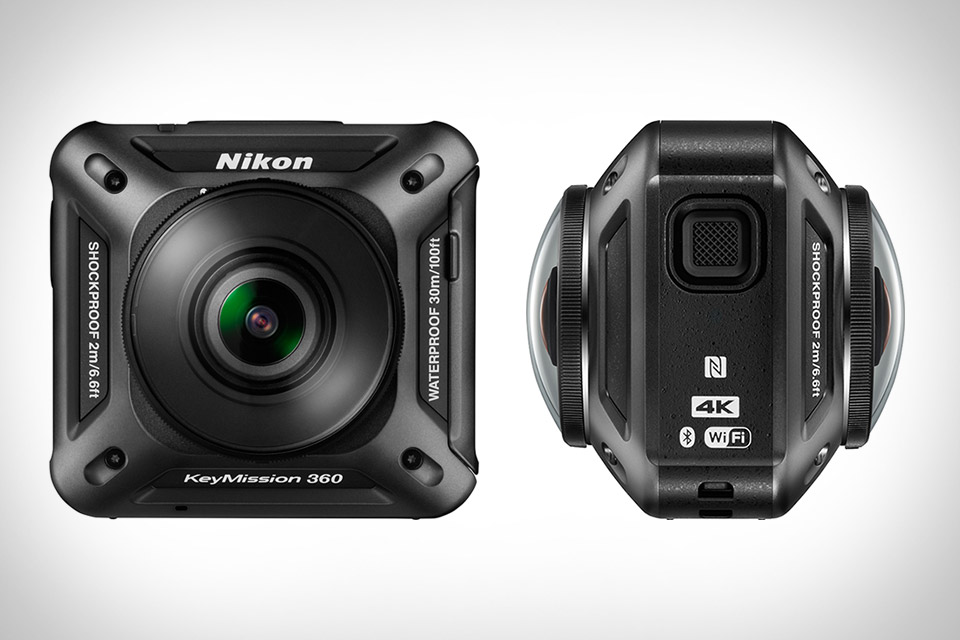 Nikon KeyMission 360 is considered as an action camera that is shockproof (2 meters of free fall), suitable for adventures under water (29 meters waterproof) or under snow conditions (operable down to -8 °C ambient temperature). The camera includes two fisheye lenses with sensors of 20MP resolution each that is able to capture and immediately stitch in 4K Ultra HD videos within the camera. Users can shoot time-lapse sequences and slow-motion videos, as well as 23.9MP spherical photos. Nikon supports smartphone apps such as SnapBridge 360/170 and KeyMission 360/170 that allow to preview the shooting footage. The camera’s price is 499 €. 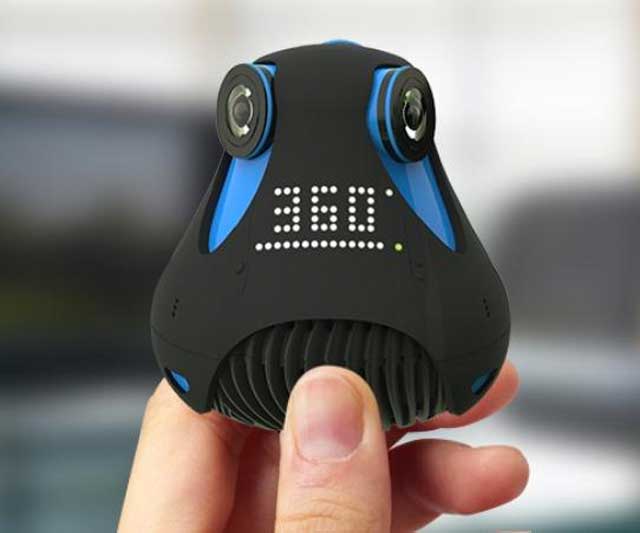 Giroptic 360cam is another outdoor, adventure suitable camera that is waterproof (10 meters) and shockproof due to its rubber-coated body. It allows to capture real-time stitched spherical 4K photos, 2K videos at up to 30 frames per second, time-lapses but also live streaming to the internet via a Wi-Fi connection. Additionally, this camera has three lenses, each with a 185-degree opening angle and three incorporated 3D microphones for spherical sound. Another special feature of the Giroptic 360cam is its detachable base that allows to recharge the battery independently. The price is 499 €.

Training and professional knowledge are essential when using complex camera systems for professional 360-degree movie makers. Post-production requires a lot of time when stitching multiple images manually together. However, a manual process can lead to better stitching results with less color deviations, spatial distortions, and optional patching of captured filming equipment like tripod legs. The prices for professional cameras are considerably higher when comparing them with the previously described two clusters. Some examples of these cameras would be GoPro Omni, Facebook Surround360 or Nokia OZO (Hand Orellana, 2016). 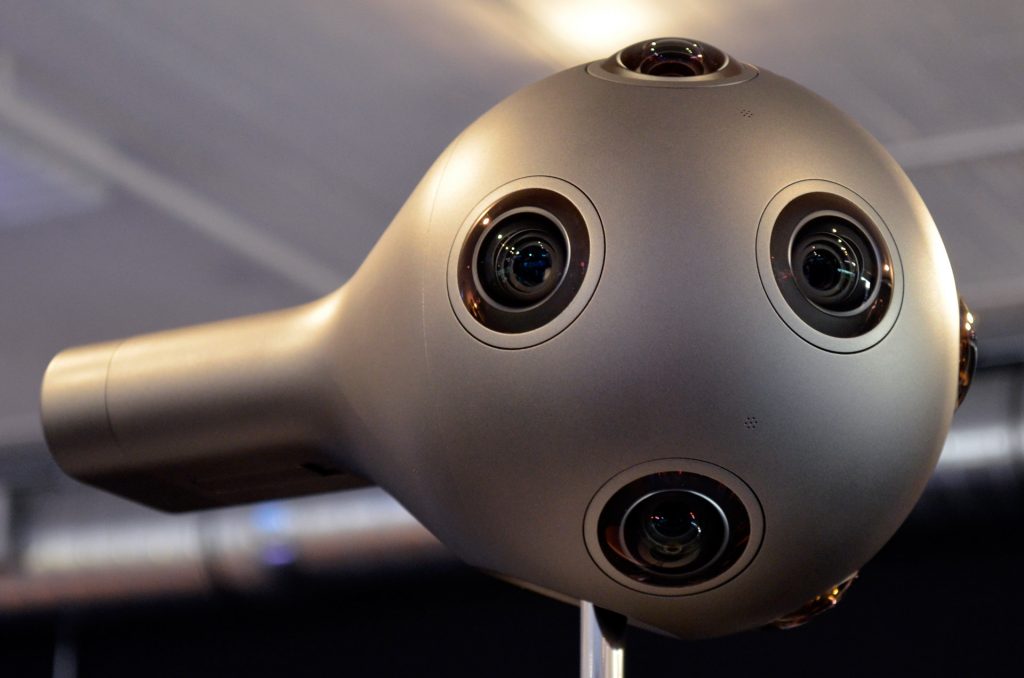 Nokia OZO: This camera system is considered to be one of the best for professional 360-degree filming. It provides a VR monitor that shows a real-time interactive preview of the shooting scene to film directors. The OZO’s goal is to capture the surroundings entirely in stereo-view, thus creating a powerful sense of presence. This is realized using eight synchronized 2K sensors with 195-degree fisheye lenses each that captures a stereoscopic 3D video at 30 frames per second. Additionally, OZO allows to capture audio with eight incorporated 3D microphones. The capturing of the image, sound and subsequent stitching happens simultaneously without much effort. The system’s price is 40,000 €.

Facebook Surround360: This system includes 17 cameras, 14 of which are wide-angle cameras, one fisheye lens camera on top and two on the bottom of the rig. It allows directors to capture synchronized 360-degree footage of highest quality. Each lens can export 4K, 6K and even 8K videos which is beyond current industry standards. Furthermore, the provided software includes stitching tools and is available to the public to be downloaded for free. The price of the Surround360 is 30,000 €.

Besides conventional video editing steps like cutting, or making some color corrections, 360-degree video editing requires the additional step of stitching a number image streams together. If the user wants or needs to do this step manually, working with special stitching software becomes essential for 360-degree video creation. Examples for this kind of software are Kolor Auropano Video offed by GoPro, Mettle Skybox Studio V2, as well as the freeware tools VideoStitch and PTGui. However, most of the consumer cameras such as Ricoh Theta’s cameras are provided with automatic stitching software that does not need additional editing efforts, or Nikon KeyMission 360 that stitches images immediately within the camera. Therefore, the subsequent step of 360-degree videos creation will be discussed.

There are several post-processing software tools, such as Adobe Premiere compatible with both MacOS and Windows devices, while iMovie and Final Cut are only supported by MacOS devices. The main focus of this section will be exemplarily on Adobe Premiere. It allows to warp 360-degree videos in an equi-rectangular projection, thus, making the editing process of cutting, trimming or adjusting colors as simple as with a conventional video footage (Brown, 2017). The equi-rectangular projection is a flattered spherical image that “shows the entire vertical and horizontal angle of view up to 360 degrees” (Cambridge in Colour, 2017). Some steps for 360-degree videos editing are needed to be taken into account.

We hope that this overview about hard- and software was helpful to you. The next blog post will discuss important strategies for 360° content production. Stay tuned!